There are only two weeks to go, but the NXT LVL contestants are proving that they are the real deal.

There are only two weeks to go, but the NXT LVL contestants are proving that they are the real deal. The epic original songs they created in last week’s episode were hits with their newfound fans, many of whom shared their appreciation on social media.

Legion (@legiondetenator) wrote: “#VodacomNXTLVL @jessereignz bro is gonna be a star, attitude is proper the way he is voicing his feelings in a calm and respectful manner even though he is upset. Damn I feel like every time I see this guy on the show I find ways to improve my own character as a person & artist.”

Tiego Mhlongo (@tiego01) said: “I hope Zethe understands that being number 5 is just based on a few people’s opinions. SA has your back girl, we love your work; we don’t all have the same taste in music and that’s okay. Keep your head up, someone out there can’t wait to work with you. #VodacomNXTLVL”

Even the mentors are sharing the love. Riky Rick (@Rikyrickworld) took to Twitter to say: “This is the first season #VodacomNXTLVL we have a lot of room for improvement but nobody can [say] these kids are not talented as hell. Very proud to be part of this show and proud of the kids for doing their best.”

Before the rising stars start to think the hard work is over, NXT LVL turned things up with a challenge Danny K said was “unheard of”. But first… the small challenge! The contestants had to remix Babes Wodump’s gqom hit “Umngan’wam”. The queen of gqom surprised the youngsters by showing up and helping them laying down their tracks.

Theo’s “shout out” to his hometown, Kilpgat, won over Babes with his rendition and bagged 20GB of data every month for the next year. The rest of the contestants each got 5GB per month.

For the big challenge, the acts were given an hour to shoot a music video, which they had to conceptualise. There were creative differences, no-show extras, tons of pressure and late mentors for the NXT LVL contestants to deal with. Some, including Jesse and Zethe, rose to the occasion while others, such as last week’s winner Thami, struggled to make it work. Jesse’s talents seem to extend beyond his sick raps. He also impressed the mentors with his set design, which put him back in first place. He will be hard to catch now, as this week the winner scored double the amount of points.

The leaderboard now looks as follows: 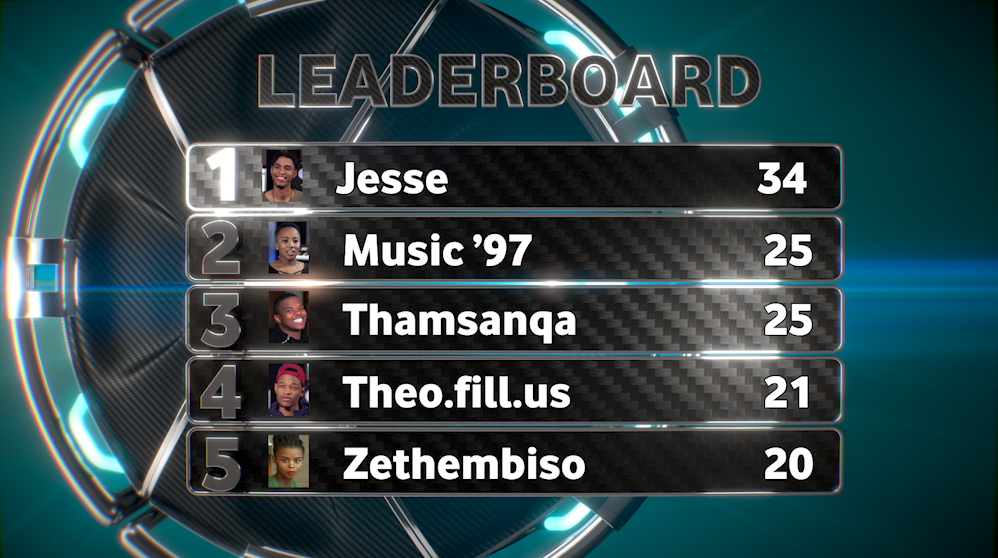 Next week, the viewers get to have their say as voting lines officially open. Tune in to Mzansi Magic (DStv channel 161) on Wednesday at 21:30 to find out how to vote for your favourite! The penultimate episode will also feature a starstruck Theo, excited Jesse and challenges to push all the NXT LVL contestants out of their comfort zones. Here’s a sneak peek of what’s coming up: