The Samsung Galaxy Note 8 for business

The new Galaxy Note8 is part tablet, part phone and all business. Packed with functionality and designed with users' needs in mind, the Galaxy Note8 may be the most feature-rich phone/notetaking device out there.

The new Galaxy Note8 is part tablet, part phone and all business. Packed with functionality and designed with users' needs in mind, the Samsung Galaxy Note8 may be the most feature-rich phone/notetaking device out there.

The new S Pen sees some upgrades and improvements from previous versions of the Note, including a finer tip and improved pressure sensitivity. The Pen's capabilities have been enhanced as well, allowing users to hover over words or sentences and translate them to a selection of different languages (71 at this time). Frequent business travellers will appreciate the conversion of units and currencies into the user's preferred language.

Security measures are becoming an increasing priority for smartphone purchases and, while Android have begun to improve its security with features like Play Protect and accelerated security updates, Knox is still the best you can get. Knox is Samsung’s defense-grade security platform, which is built into the Note8 and is used by militaries, governments, financial institutions, and health-care agencies across the globe, so it will likely be secure enough for your business. Along with password and pin protection, the Note8 comes with an iris, face and fingerprint scanner, which can be selected based on your preferences. As with the S8, the fingerprint scanner is located on the back of the device, next to the camera. 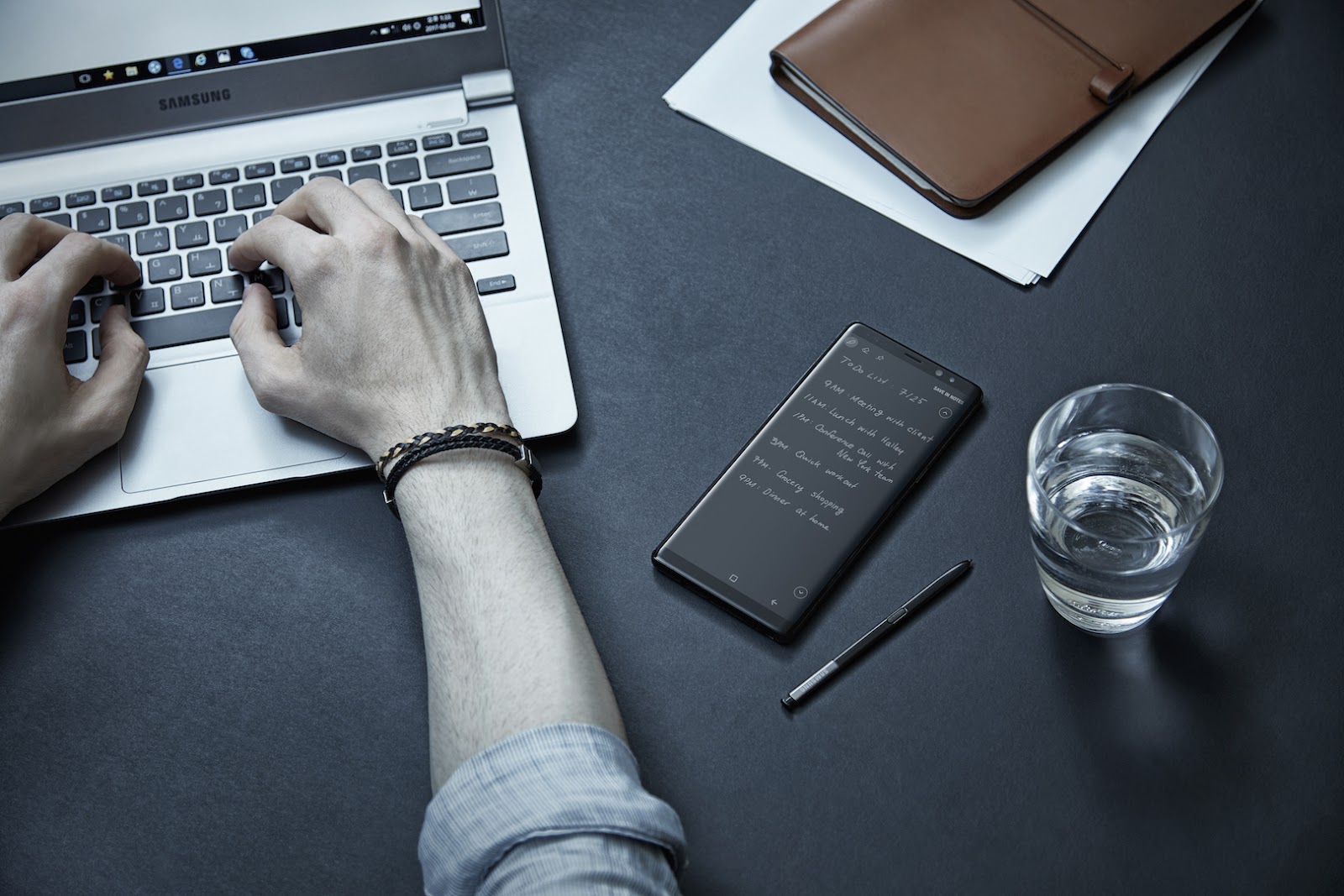 The Note8 allows users to pair apps that are commonly used in tandem on the Edge panel. When two apps are paired, anytime they are accessed through the Edge panel, both will launch in a multiwindow view. Pairing commonly used business apps such as Gmail and Evernote could make on-the-go record keeping significantly easier, while pairing various social media apps could make it easier to keep an eye on digital marketing efforts and overall online presence.

The Note8’s front facing camera is a typical 8MP camera, but on the back we find two 12MP cameras with optical image stabilisation – one wide-angle lens and one telephoto lens. When the user takes a photo with the rear-facing cameras, the Note8 automatically captures two images, one with each lens, meaning you can choose between a highly detailed wide-angle shot with a clear view of the entire background or a focused image of the item in the foreground. The wide-angle lens also has a Dual Pixel sensor with rapid autofocus, which makes it possible to grab clear images even in low-light situations.

DeX might just be the Note8's number one business feature. When attached to a display, DeX allows the Note8 to become a desktop workstation. Connecting your device to DeX is fluid, fast, and functional and when connected, the Note8's Android 7.1 OS resembles a typical office workstation. When detached, applications continue running in the Note8's mobile mode. The ability to switch between a handheld device and a fully functioning desktop workstation makes the Note8 an indispensable work machine.

The Samsung Galaxy Note8 is now available to purchase from Vodacom online.