The 2015 Rugby World Cup in England was further evidence of the sport’s global appeal and a World Cup in Africa will only add to that worldwide reach.

The 2015 Rugby World Cup in England was further evidence of the sport’s global appeal and a World Cup in Africa will only add to that worldwide reach.

Commercially there hasn’t been a more lucrative return for World Rugby and the ticket sales of close to 2.5 million, aligned with the global television audience and social media reach, positioned Rugby World Cup as the biggest global sporting event of 2015. South Africa’s 2023 Bid projections are that all these numbers will be bettered should the country win the hosting rights. World Rugby Chief Executive Brett Gosper confirmed the commercial value of 2015’s showcase event was up 50 percent on the 2011 World Cup in New Zealand. Gosper explained the increase included money from sponsors, broadcast revenue - with TV being the primary generator - and hospitality.

England Rugby 2015 generated £250 million in tickets revenues, with a £80 million surplus to World Rugby and £15 million surplus to the RFU to be invested into the development of rugby. This is an indication of how South African Rugby can commercially benefit and by extension South African sport, with SA Rugby’s commitment that smaller sporting federations will also benefit from the net profits. South African Rugby Union Chief Executive Jurie Roux has emphasised that the economic benefits of the World Cup being in South Africa is how cost effective it is in comparison with the United Kingdom, Ireland and Europe, without ever compromising quality.

England 2015 sold 2.47 million tickets, France 2007 did 2.25 million and New Zealand 2011 generated 1.6 million in ticket sales. South Africa’s projections are a record 2.9 million across eight stadia in seven cities. More than one million people visited the Fans’ Zone and the 2015 Rugby World Cup broke all records for online interaction, with more visitors to the official website in the first weekend of the 2015 event than in the whole of the 2011 tournament. Television viewing numbers also set new records in traditional and non-traditional markets, with 25 million viewers in Japan tuning in for their team’s victory against Samoa.

In Germany, a non-core rugby market, remarkably three million people watched England play Australia in the Group phase. Globally, more than seven million people play rugby but Africa is the game’s greatest growth area in the 21st century, which is another of South Africa’s motivations for bringing the tournament to Africa for the first time in 28 years. 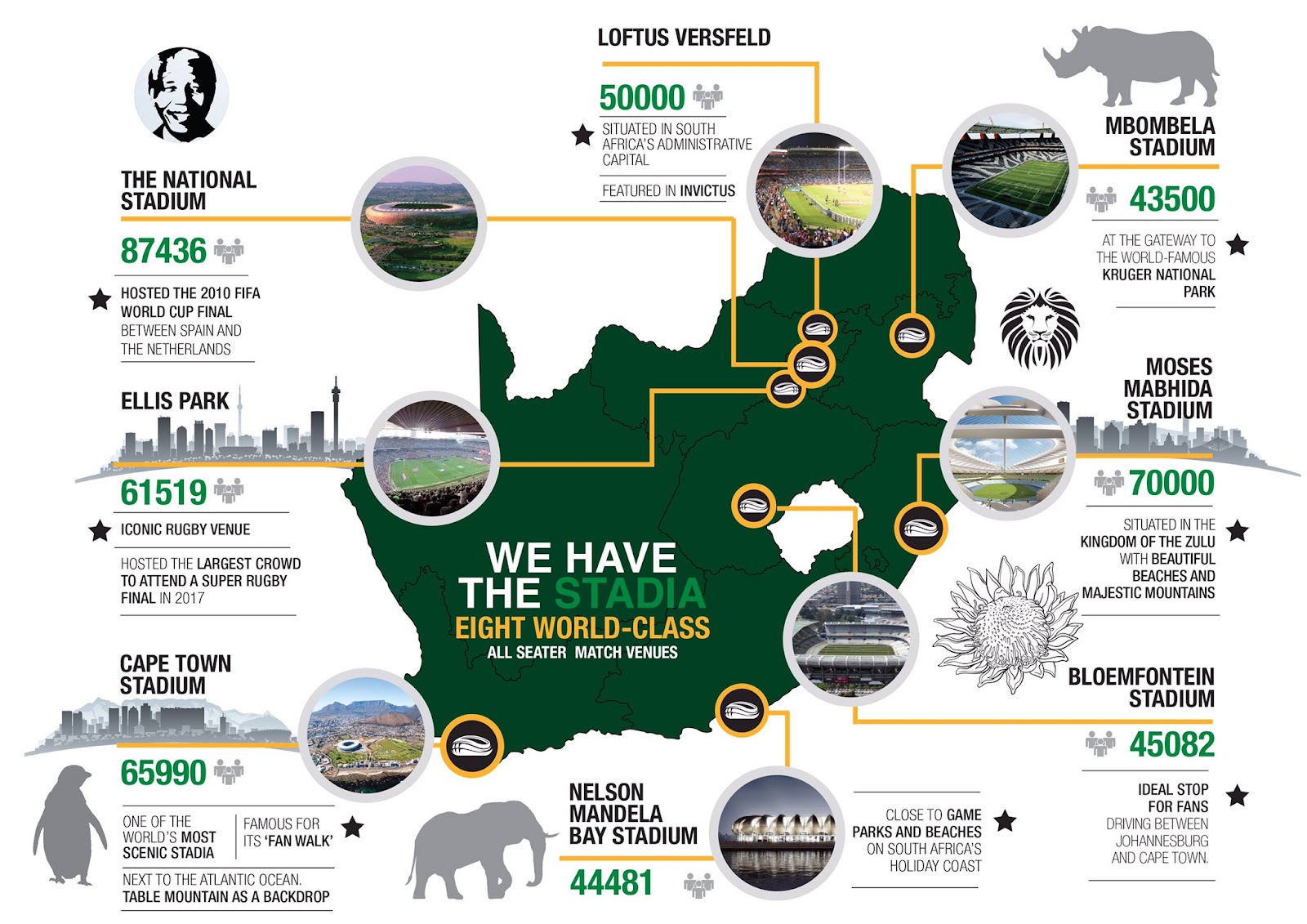