Six years from now, we might all be watching the Rugby World Cup at Newlands or Soweto Stadium. It all depends on how the members of the World Rugby Council vote on 15 November. Here are the nitty-gritty details of the voting process and bid criteria.

At Vodacom, we love our rugby. We’ve rewarded RED customers with once-in-a-lifetime experiences, such as the Blue Bulls Father & Son Sleepout, and a VIP experience at the Lions SuperRugby playoffs. And now the All Out Rugby team take you through the nitty gritty of the Rugby World Cup 2023 nomination process.

Six years from now, we might all be watching the Rugby World Cup at Newlands or Soweto Stadium. It all depends on how the members of the World Rugby Council vote on 15 November. Here are the nitty-gritty details of the voting process and bid criteria.

Three countries are bidding to host the Rugby World Cup in 2023 – South Africa, France and Ireland. All three countries have now officially submitted their respective bids, the signed host agreements, and the signed government guarantee letters. And on 25 September, all three bid teams made their final presentations to the sport’s governing body in London.

The decision as to who hosts the lucrative event is now decided by a vote. The Board of Rugby World Cup Ltd, based on a public evaluation process, will in mid-October issue a recommendation to World Rugby Council as to who should be the 2023 hosts.

The World Rugby Council will then vote to determine the host on 15 November.

How the vote works:

It is a straight majority vote. If no country gets a majority in the first round of voting then the country with the least number of votes at that point is eliminated. In the event of a split decision, the chairperson, has the casting vote. There are 37 votes, so 19 votes will ensure a winner. None of the three bidding countries can vote.

Tier 1 countries England, Wales, Scotland, Italy, New Zealand and Australia get 3 votes each. Argentina and the Regional Associations Oceania, South America, North America, Africa, Europe and Asia get 2 votes each, while Canada, USA, Japan, Georgia and Romania each get a vote. 37 votes in total, 19 needed to win!

Each country's submitted bid had to address seven areas, as set out by World Rugby. 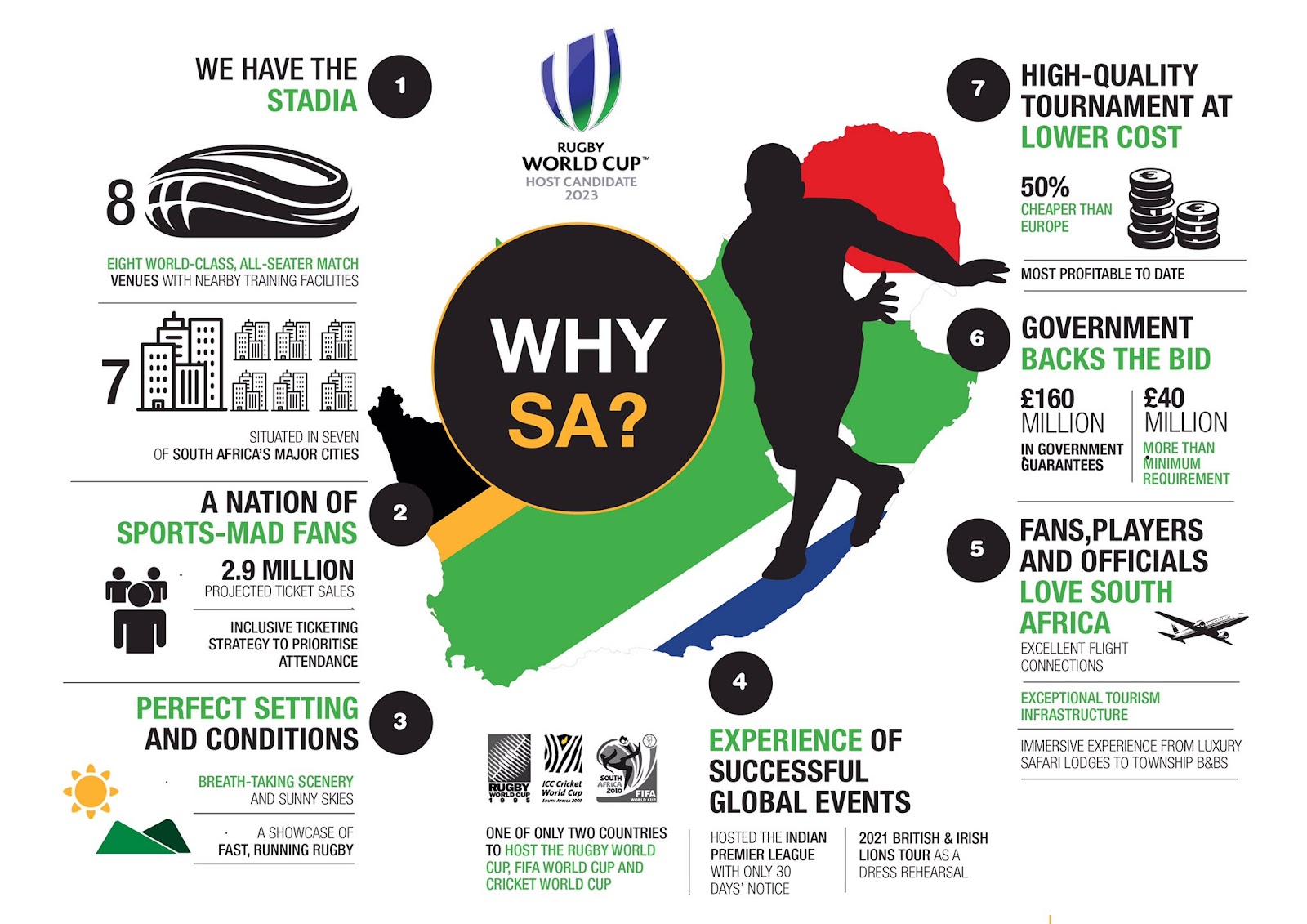 The respective bids will be measured against a regulated World Rugby scorecard of:

The Finance, Commercial and Commitments criteria are further broken down to: Legislation and Customs, Financial Feasibility, Commercial Rights and Financial Guarantees.

The bids are in, and now we wait!